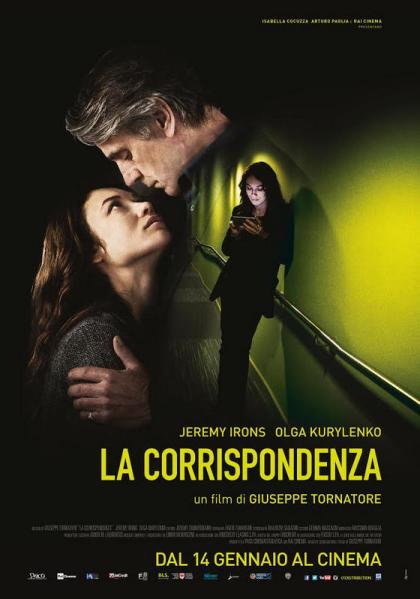 How would you answer my question if I ask what is the best way to retain that little intimate happiness before you find out that not many days or months are left for you? This perhaps is not an easy question to answer, however, the filmmaker of “Cinema Paradiso” and “Malena”, Giuseppe Tornatore, with the help of Jeremy Irons and Olga Kurylenko is able to find the best way to immortalize pure love through communication even long after a man is gone.…

Ed Phoerum asks Amy Ryan if there is anything else left that they still don’t know about each other, as he continues passionately kissing her. As he insists for the answer, Amy says, “you’re an undiscovered solar system with full of stars and I will never rest until I study all of them”. This conversation is the only time they ever see each other, as soon after the man is pronounced dead, but for some reason, the letter from him is still coming… Is he really dead or he finds a way to keep Amy company even though he is no longer around? Mystery is mystery. Death is death! But it seems all the correspondences live its own life… And Amy at some point will have to get back to her answer to study “the solar system” if she wants to find the answer.…

Ed Phoerum is an astronomer and much older than Amy, who works on the movie sets as a stuntman. Ed prefers calling Amy with her nickname, “kamikaze”, due to her job. Due to his busy schedule, you quickly find out that he always keeps texting Amy while he is away, or appears in video chat. But one day, all of a sudden he disappears from online, however, the messages still keep coming from him. When she goes to one of the conferences in the University where he gave lectures, she witnesses the announcement of Ed Phoerum’s death, however, at right that moment, he was texting her like if he were alive.

As the story unfolds, the strange atmosphere continues, while the mystery around the text messages, mails, and video records keep bombarding Amy. While she tries to cope with the loss of the love of her life, Amy continues hanging on to those text messages as the only way to communicate with the man, who is presumed dead. In order to find out the truth, Amy begins her investigation, in the meantime, doing what Ed would love her to do, which is the most incredible part of the film I wish you will get a chance to know once you see it.

Tornatore’s La corrispondenza is a very strange, but in the meantime, extremely engaging film from the start till the end. Even though you may figure what will be the outcome of the endless letters, it is however the metaphor of relationship and true meaning of it is what filmmaker tries to study throughout the film. The question of what happens if the one you love dies, and you get an opportunity to stay in touch with him is the main point of the film as Amy after sometime stops missing him, just because he never left her, even after his death or sudden disappearance from her life. Because, even a slight appearance through communication is much more effective than physical presence which is all what La corrispondenza is about.