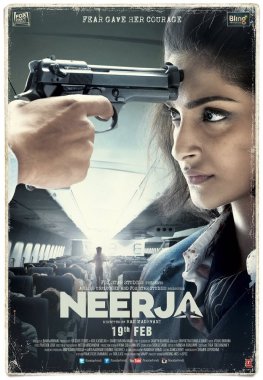 Everyone on this planet can claim to be the most courageous and brave person on Earth. But do we really act that way to prove ourselves right? Having said that, I don’t mean for us to act like the Terminator or John Rambo, but to stand against injustice in a way not all of us could have ever done, but really wish to. Neerja Bhanot was 22 years old, just a few days away from turning 23, does something amazing to showcase what does it mean to be the kindest, caring and fearless person when it comes to protecting as many lives as possible. In her case, it happened with the Pan Am’s hijacked airplane by terrorists where she was the senior flight attendant.

The film opens with Neerja, who just left her arranged marriage full of abusive and always demanding husband, and returns back to her parents. She is beautiful, talented, works as a crew member in Pan Am Airlines, and full of hope to build a happier life for herself. She even has a young man who seems will appreciate her the way she would love to. Her parents are also very supportive standing beside her till the end.

In the meantime, the group of terrorists plots a plan to hijack an airplane in Karachi to demand the government to release their “brothers” from prison. However, things turn dramatically when, in an already hijacked airplane, Neerja alerts the pilots right in time for them to be able to follow the security protocols – to leave the airplane before its take off. When the terrorists are caught by the unexpected surprise, they had to change their plan, and for that they decided to start killing each American they can find on the airplane.

Neerja overhears their discussion and alerts her crew and orders them to hide each American passport they can find, which eventually allows her to save forty-eight innocent souls. But her heroic action does not end there, as she continues her fight for each passenger standing alone, strong and brave against the armed and desperate men. Despite having a sad ending for herself, Neerja Bhanot goes down to history as a person who showed the most incredible human kindness possible.

“Neerja” is a true story about a woman with the most amazing characteristics not everyone has. Her mind, the level of compassion, intelligence and judgmental skills had no limits, even at a time when she knew that by covering three children with her body to protect from bullets she could lose her own life. Despite knowing that, she never thought twice to do what she believed was right where she ends up sacrificing her own, a very short, but extremely bright life.

In conclusion, NEERJA, directed by Rad Madhvani is an excellent biographical thriller describing unbelievable heroism displayed by Neerja Bhanot. The story development is outstanding, while it gives a significant amount to Neerja’s personal life highlighting what the young woman could have had if she had not lose her life back in 1986. It captures deeply the way Neerja cared about other people more than herself, which is what I am sure will amaze you most.

Yes, this film might make you cry, and cry a lot, but all these tears will be worth it at the end of the day, when you realize how many people are able to spend their evenings with their loved ones, because of one person, who made it possible for them, but sadly, impossible for herself.