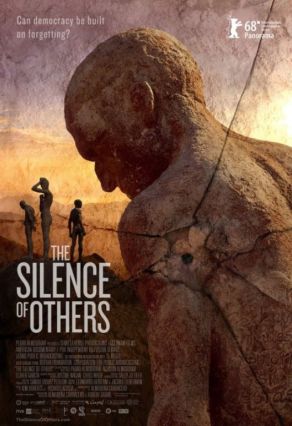 How convenient it is to create an amnesty law so that everyone in politics who commits a crime against humanity can get away with it while the ordinary people can’t do the same, for one simple reason – they have no power of coming up with any law whatsoever to have them defended and secured from ending up in jail. So why do we need to have the statute of limitation and when and under what circumstances can legal proceedings be initiated?

All these and many other history lessons and facts can be learnt by watching “The Silence of Others” from Emmy-winning directors Almudena Carracedo and Robert Bahar that follows, step by step, chronicles of Spain’s ongoing battle to let the past stay there and keep Franco’s killing in the dark, while the people who suffered from the injustice, constant killing, and have faced true genocide want justice to be served or the body of their loved ones to be returned by politicians who still hide behind the Amnesty Law where they feel comfortable enough not to revoke it.

“I was six years old when they came for my mother. People from the town, Franco supporters. They found her the next day by the side of the road. They could not take her to the cemetery. The townspeople wouldn’t let them.” – Looking at the camera, an elderly woman, who just brought a flower named Maria Martin points at the road, saying, “This is the gravesite. This is the mass grave.” – the same place where her mother was ordered for her clothes to be removed, and not only hers. Every other women’s as well. To be killed and buried right there.

“The Silence of Others” is a heartbreaking story about the victims of Spanish dictator Gen. Francisco Franco and his victims, who lost their lives, and the ones who struggle to live after they survived his bloody time. It’s 1936, the playback takes the viewer back to history, to the epicentre of Spain’s civil war which was triggered by a military coup. Then, the archival footage captures Franco next to Hitler. After that, for 40 years, Spain finds itself under Franco’s dictatorship, who commits mass killings the same way Pinochet did to Chile.

Those who survived begin their journey in bringing legal payback to those who have contributed into taking lives, torture and all other unthinkable actions, unfortunately, humanity itself has done against its own species. It talks about the Law of Amnesty, known as “The Pact of Forgetting” the Spanish Parliament came up with after Franco’s death so the nation can begin the process of healing, while those who backed Franco’s actions can still remain in power. So, having the law of forgiveness, the politicians have set the stage for themselves not to be brought to justice, like it’s not meant for them.

Jose M. Galante “Chato”, the documentary subject, takes us to the place where Antonio Gonzalez Pacheo lived, the man known as “Billy the Kid” who himself tortured Galante on three different occasions when he was young. The film also concentrates on the lawsuit of survivors, and those who demand for the body of their loved ones to be returned to the family that literally, for some of them, would take many decades to have claimed something that rightly belonged to them.

As you watch the film you realize how the judicial system can be so cleverly manipulated. How the legislative can find a gap to let the statute of limitations be worked or, as it usually happens, not talk about it when it’s not convenient. Strangely or not, the history lesson we get from this film is damning, horrifying but in the meantime, eye opening. The look it provides it stirring and brutal. The scenes from the actual protests, how the people were beaten up and died right on the road, or what the victims have to say is something hard to digest.

In the end, the truth is, which is also the power of this film – history, past, and life cannot be taken for granted. It can’t be misused or unsupported. And when it comes to forgetting, the law or politicians cannot dictate what can be remained in the memory of those who suffered from the aftermath of senseless killings. The right to forgiveness can belong to only ones who were the victims and not those who caused the pain to stay with them for the rest of their lives. In the end, what Maria Martin says makes sense, and that is something we all have to think about: “How unjust life is. Not life. We humans… we are unjust.”