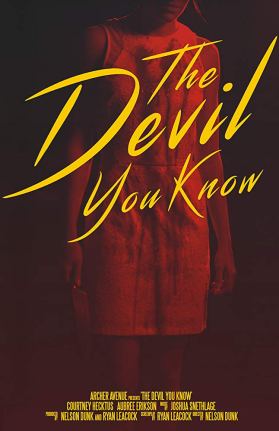 What would you do if you learn that your sibling, sister or brother, has an addiction the consequences of which is far greater than you can imagine? And the addiction “The Devil You Know” explores is a dark and endless level of addiction, but it’s not just about drugs or alcohol, neither shoplifting or swearing… Not that, but you wish it was though!

Written by Ryan Leacock and directed by Nelson Dunk, “The Devil You Know” follows the strong bond between two sisters, Rachel and Megan, who find themselves on the breaking point of their tense relationship, where one must decide either to cover up the aftermath of the other’s uncontrolled addiction or report to the authorities. After all, it’s not easy to clean up the carpet and the house each time after the mess Rachel leaves behind – due to her strange sickness that causes her to kill people. But before that, Megan is yet to learn a terrifying side of her sister’s problem she will have to learn to deal with.

Rachel seems to have a steely patience or nerve, if this can be said that way, when somehow she was capable of standing right in front of her sister holding a big knife in her hand looking for another body to reconnect with. Then a strange and seemingly not out of ordinary conversation begins between the two women. The viewer gets a glimpse of what happens with Rachel and why she refuses to take any treatment, and why, in the meantime, Megan can’t help but continues helping her sister who has no stop button implemented in her personality.

In the end, Megan played by Courtney Hecktus with Aubree Erickson as Rachel and Ryan Leacock as the Dead Man, “The Devil You Know” is a fun short feature to watch, even though it has some gruesome scenes. It’s engaging and has a good premise. It explores the sisters’ bond and how far they can go no matter how difficult that can be. It emphasises that there is always a possibility of cover up, or working together to hide the dark truth. Because when it comes to family, it’s always a priority. At the end of the day, remember, the devil you hate might be loved by someone else. It just happened that the Devil this particular piece talks about is a human being that is greatly admired by her own sibling, who knows only one logical thing to do – be by her side when the rest of the world will stay aside.