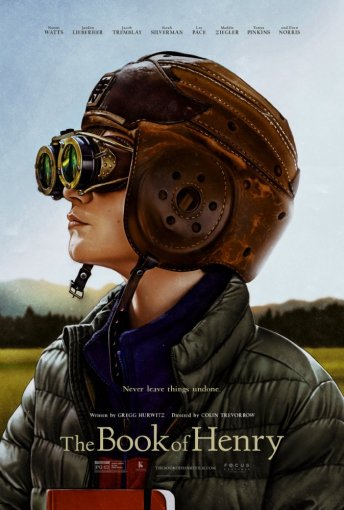 How good are we at standing against injustice? What do we exactly do to help out our fellow citizens to escape abuse? What is our precise action when we see a man hitting a woman or a woman abusing a man? You see, there is a fine line between gender abuse and not so. But one thing, however, is certain from this very moment on; how can we say, “this is none of my business?” And we can’t, not anymore. Because there is an important lesson taught in Book of Henry, and that is – this story is no longer mine, but yours as well.

Henry (Jaeden Lieberher) is fast, and in some ways, way too fast approaching his twelfth year. He is a man of family. He is gifted, intelligent, wise and thinks and acts like if he was a grown up man. He despises injustice and is willing to stand for those who can’t fight for themselves. His mother Susan is the opposite of him. She works at a fast food restaurant, plays video games when she is home, while her other son, Peter (Jacob Tremblay), relies on his brother as if he was his father. And when she sees a man hitting another man in the grocery store, it was Henry who was ready to attack the stranger, not her.

With the opening scene we hear Henry’s voice when he addresses the audience by saying, “There is decent people, most of the time. But some of them are weird.” He added. And he was right. Henry was just a younger version of his mother, who is a decent, honest and hardworking woman as Henry, who, if he gets enough time would have been remembered as a hero. But as you already know, every tale has its good and bad guy – and the bad guy is Glenn Sickleman (Dean Norris), a Cavalry police commissioner who abuses his stepdaughter. In regards of happy ending… Every story has its own… But this one is what Henry came up with…

As we quickly learn, Henry realizes that his neighbor Christina (Maddie Ziegler) and classmate is a victim of abuse. Her grade went down. Her bruises are visible. School principal doesn’t do much, and police won’t even bother… After all, who will believe that Sickleman doesn’t have an impeccable or rather, crystal clean record? When Henry makes an anonymous call to report child abuse, he again gets frustrated hearing many unnecessary questions that led to no actions. When he is determined to find conclusive evidence, he goes way beyond his age and abilities by creating a perfect plan to end the domestic violence. But sadly, when Henry later on finds himself in the hands of his mother in a dark room of the hospital, crying and wanting to see daylight, it was the last thing he ever does before he dies. But there was, good or bad, but a positive side of it as leaving the book to his mother Susan, he has a reasonable hope to expect that Susan will execute the plan he provides, as she understands it is now her business as well.

There is one important thing about Colin Trevorrow’s flawlessly directed The Book of Henry, written by Gregg Hurwitz, you will find most astounding; it’s that this movie gives you a satisfactory feeling of what you always wanted to see –  how justice must be served. For that to happen there is no need for anybody to look out for a villain. No need to send bullets to anybody’s head. Nobody should get a binocular to spy on their neighbors. When the time comes, an opportunity will find the right candidate who will be able to do what Henry did. And the piece, and enormous one, of thought is given in a way that when little pieces will be connected, the puzzle will finally be solved.

In conclusion, The Book of Henry is outstanding, wicked, and subtle movie about the lines, we as citizens must or not must cross. The story itself is so rich that it could have taken any approach and end in any possible way, but luckily, it takes a right direction and never, even for a bit, goes wrong. By watching the movie, you can tell how careful writer Gregg Hurwitz was, like a good parent taking care of his imaginary children. Naomi Watts as Susan, Jaeden Lieberher) as Henry were excellent as on-screen mother and son. Having said that, The Book of Henry is the only movie of this year that will receive only positive reviews. And after you watch it, you will never wonder why….